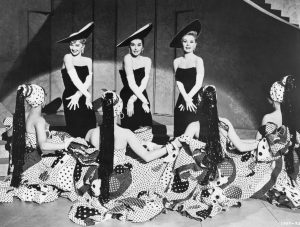 Nothing against production designer Ross Wallace, but if a documentary film needs a production designer at all it’s a sure sign something’s afoot. Such is the case with Women He’s Undressed, the first film in five years from celebrated veteran Australian director Gillian Armstrong, whose 1979 feature film debut My Brilliant Career was a defining moment in the Australian New Wave. An illuminating and involving portrait of the prolific, Down Under-born and Oscar-winning costume designer Orry-Kelly, whose crowning achievement was that gravity-defying gown Marilyn Monroe fills out admirably in Billy Wilder’s Some Like it Hot, the film overstays its welcome by punctuating his story with ill-advised dramatic fantasy sequences that are meant to illustrate the anguish of a gay man in mid-century America but come across as heavy-handed and mean-spirited. Armchair Hollywood historians and fans of the artist’s films will be drawn to the subject, but in the end it feels more like a DVD extra than a stand-alone work.

Orry George Kelly was born in 1897 and raised in the small New South Wales coastal town of Kiama. He lit out as soon as he could for the seedy dockside underworld of inner-city Sydney suburb Woolloomooloo and then the bright lights of Broadway. Whilst rooming with an aspiring actor named Archie Leach, who would eventually change his name to Cary Grant, Kelly established himself designing sets and costumes until, in 1932, Hollywood beckoned.

For 12 years, under his newly-affected professional name, he served as chief costume designer for Warner Bros., and, after being discharged from the US Army Air Corps for alcohol problems, freelanced for Universal, RKO, Fox and MGM. In a career spanning nearly 300 films, he won Academy Awards for his work on An American in Paris, Les Girls and Some Like it Hot and is lauded for career-boosting sartorial advice to Bette Davis in Mr. Skeffington and others, Ingrid Bergman in Casablanca, and, of course, Monroe—not to mention Tony Curtis and Jack Lemmon—in Some Like it Hot.

There’s a story here for sure, and as long as Armstrong sticks to the facts it’s a good and involving one. Such luminaries as actresses Jane Fonda and Angela Lansbury (both of whom worked with Kelly), costume designers Ann Roth and Deborah Nadoolman Landis, and scholars Leonard Maltin and David Chierichetti weigh in on Kelly’s influences and style. The gowns he designed for the background streetwalkers in Wilder’s Irma La Douce, for instance, were inspired by the denizens of Woolloomooloo, he rose to the challenge of dressing Davis’ challenging figure, and so on.

Unfortunately, Armstrong has chosen to flesh out the narrative with passages featuring actor Darren Gilshenan as a weary, dissolute but nevertheless raconteurish Kelly, a smirking dandy who was apparently a very similar piece of work in real life. Whilst the sequences are distracting, they’re also very Australian in their devil-may-care theatrical flashiness and celebration of life as a decadent, often tragic cabaret. Equally jarring is a narrative through-line involving Grant’s spurning of Kelly and a supposed life-long effort by the actor to undermine his closeted career, a charge apparently buttressed in a long-lost memoir by the costume designer unearthed by Armstrong at his relative’s house in rural Australia that has yet to be published.

Tech package is polished, with fine quality film clips in proper aspect ratios summoning the brilliant career of an apparently difficult yet undeniably talented craftsman in a Hollywood now long gone but survived by the films, and, of course, the dresses.