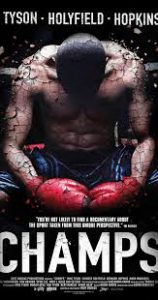 As blunt and methodical as the now-soured sweet science that is its subject, Champs is the movie-going opposite of a prize fight, a slick but not particularly stylish doco that actually becomes more focused and energized in the late rounds. With the long-delayed Mayweather-Pacquiao welterweight bout looming in early May, the timing is the best it can be for a limited Gotham release, in concert with on demand, of writer-director Bert Marcus’ clearly sincere but achingly clichéd look at what’s good and bad about the sport and the society that sanctions it. Nearly a year after its debut at the TriBeCa fest, item is best suited to cablers and other small-screen outlets.

It’s no secret that boxing history is riddled with rags-to-riches stories in which a precious few talented and determined young men, more often than not plucked from poverty and molded by strong father figures, rise to the top of the sport only to lose it all to greedy hangers-on and that old stand-by, “bad advice.” This, in essence, is what happened to both Holyfield and Tyson, and Marcus spends the first third or so of the film alternating between tride and true talking heads unnecesary slo-mo re-enactments to illustrate the extreme poverty in which they, as well as Hopkins, grew up.

Whilst Tyson and Holyfield are making waves as young, successful fighters, Hopkins is waylaid by five years of an 18-year prison sentence spent as the result of nine felony convictions by the age of 17. Nevertheless, pic hits its archival strive by the time of Hopkins’ 1988 release—a fact the curious viewer will have to research, as such milestones, as well as vintage televised fight sequences, are frustratingly undated.

Woven into the fabric of what becomes a then-he-fought-him, then-he-fought-him highlight reel narrative are ruminations by various trainers, journalists, promoters, biographers and academics about the social and financial inequality that informs the sport. As the three men rise to fame and fortune, pic becomes most eloquent in its examination of how boxing’s un-regulated, Wild West atmosphere puts boxers at great personal and financial risk. Today, the still-active Hopkins advocates for change in this arena, while Tyson comes across as fervently repentant and Holyfield ruefully philosophical.

Tech package is technically over-achieving without attaining an especially evocative atmosphere, but Marcus and his team make up in substance what they fall short of in style. Coming full circle in the current events cycle, there’s a brief mention of the current astronomical worth of Mayweather and Pacquiao that, in light of the upcoming match-up, suggests the battered sport of pugilism has a long way to go to right its numerous wrongs.