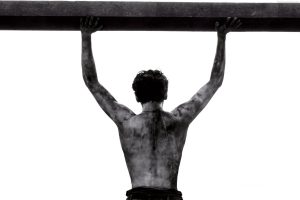 Based on the international bestseller by Laura Hillenbrand (Seabiscuit), the 137-minute film, amongst the last high-profile Academy Award-eligible film to open stateside (it doesn’t break in Oz until January 15), Unbroken tells the harrowing but ultimately inspirational story of Zamperini, who parlayed a delinquent childhood in Torrance, California, to an appearance at the 1936 Berlin Olympics as a distance runner. During World War II, when his bomber crashes into the Pacific Ocean, it signals the beginning of a grueling ordeal at sea followed by years of crushing abuse in Japanese prisoner-of-war camps thast he survives through sheer force of will.

Anticipation was high well before the curtain, as first Jolie and then husband Brad Pitt unhurriedly worked both sides of the Market Street red carpets set up for the event, furnishing selfies, autographs and handshakes to the thousands of fans and unwitting rush-hour crowds agog at the power couple’s presence in the middle of one of the congested city’s busiest thoroughfares.

Shot entirely in the Oz states of New South Wales and Queensland, pic was funded to the tune of around US$20 million by the federal and state governments. Joel and Ethan Coen share screenplay credit with William Nicholson and Richard LaGravenese, and the film was photographed by long-time Coen Brothers cinematographer Roger Deakins.

“Was there every any doubt you’d premiere the film in Sydney?” one of the evening’s hosts asked Jolie in an interview piped from the street into the theater. “No, we were always coming here,” she replied to cheers. Jolie and Pitt spearheaded a local charm offensive when they holidayed with their six children on Queensland’s Gold Coast last Christmas during the shoot.

Later, at a mercifully brief intro devoid of local pols that followed a brief making-of featurette on the pic, Jolie was joined on stage by producer Matthew Baer and thesps Jack O’Connell and Miyaki, who limn Zamperini and his Japanese war camp commandant nemesis, nicknamed  “the Bird,” respectively. “We’re very grateful,” she said, as the aud munched on salad, potato chips and quiche furnished in logo-stickered cardboard picnic boxes and washed down with champagne.

Reaction to the often-intense film was largely positive, with the black-tie audience gasping audibly at one particularly shocking maritime moment and the unrelenting visceral wartime brutality that punctuates Zamperini’s tale of survival and triumph. Warm applause at the end drowned out the opening bars of the Coldplay tune penned just for the closing credits.

Additional inspiration was provided by the presence and exposure provided to various charities, local war heroes and those who have overcome adversity.