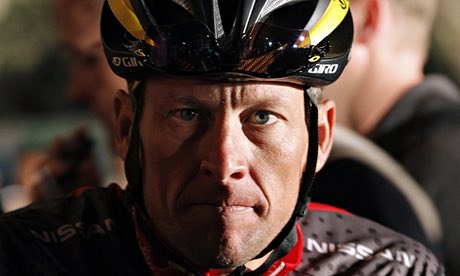 How to approach the moral conundrum that is Lance Armstrong? After denying for a decade his use of illegal substances to enhance his already remarkable physical prowess and stamina, he finally came clean to Oprah Winfrey in January 2013. This proved to be the final nail in the coffin of a high-profile sporting career and a major tumble in a breathtaking fall from grace.

Yet the athlete himself, or so it seems from his demeanor whilst being questioned by filmmaker and narrator Alex Gibney, seems not only remorseless about his years of public deceptions, but adapts a faintly “what’s the big deal?” attitude towards the scandal that erupted around him. This in the face of numerous clips that find him denying any drug use whatsoever and becoming testy, and even angry, with those who dared question his honesty.

It is this fundamental contradiction at is at the heart of the admirably even-keeled The Armstrong Lie, an intimate inside look at a very public spectacle that spreads to indict not only the sport of cycling, but celebrity culture, the power of fame and the dark pit of hubris.

If the film is more absorbing than actually riveting, chalk that distance up to a profound sense of sadness that permeates the entire affair, as well as the complete lack of a reasonable explanation that points to an extremely competitive personality apparently blind to his own malfeasance. “I don’t live many lies,” he says rather dismissively at one point, “But I lived one big one.”

Any documentarian knows the most probing films arise from being in the right place at the right time. When Gibney was hired to make what was originally titled Lance Armstrong: The Road Back, it was early 2009 and the cyclist was training for his come-from-retirement bid for an unprecedented eighth Tour de France title (tellingly, prior to that string of wins, he’d only even finished the event once in four tries).

The Armstrong narrative is and remains a compelling one: he overcame testicular cancer, established and worked hard on a foundation that raised upwards of 300 million dollars for ongoing cancer research. Gibney was given unfettered private access to the cyclist, and the film explores his Texas upbringing and late-1990s banding together with fellow athletes on the Postal Service team in the French race.

“Keeping up with the Joneses” is the way one of his teammates characterizes their decision to dope. Every other competitor was, so they had to as well. And so they did, aided and abetted by Italian doctor Michele Ferrari. In one shocking instance of hubris, they doped during the race itself by staging a fake wreck and bringing their van in to make repairs—swapping out their blood inside as spectators mingled outside.

As others have pointed out, the abiding irony of the entire scandal is that if Armstrong had not emerged from retirement to compete again, he would most likely never have been caught. But in the interim, some of his teammates had, and resented his ongoing and often righteous denials. Some of them are interviewed here, including George Hincapie and Frankie Andreu, the latter of whose wife, Betsy, seems the most bitter.

Gibney obviously felt betrayed by the revelations as well, and so demanded Armstrong sit one last time for his cameras. This he does, dutifully or otherwise, but it certainly isn’t Gibney’s fault that the answer to the biggest and most abiding question of all—“Why?”—is never properly addressed. And it is that very void that prevents the film, and the cyclist, from rising above the whole sorry mess.