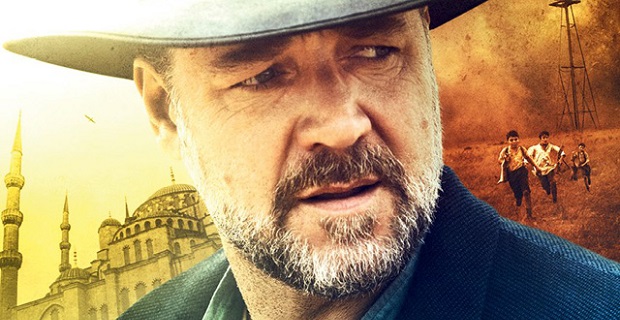 An often capriciously mixed cocktail of war film and familial, cross-cultural melodrama, The Water Diviner marks an ambitious if emotionally manipulative directing debut for Academy Award-winning box office draw Russell Crowe. As the titular Australian farmer who journeys to Turkey four years after the World War I battles at Gallipoli in search of his three missing soldier sons, he has crafted the film to play to his strengths of stoicism, determination and aw-shucks mateship at the expense of deeper truths about war and tolerance. Star and subject matter should combine for frothy grosses when the film is released domestically December 26 (the Boxing Day holiday Down Under), though the glass might be less full stateside for Warner Bros., who have announced an April 24, 2015 rollout.

This is a natural companion piece to Peter Weir’s celebrated and revered 1981 World War I drama Gallipoli, which followed the fates of two young sprinters (including a young Mel Gibson) who find themselves in the thick of the failed offensive which has come to define the Australian “Digger” (read: soldier) ideals of pluck, courage and dignity in the heat of war. The event prompted the April 25 establishment of Anzac Day, which commemorates the sacrifices of Australian and New Zealand troupes who fought and died for their countries.

An opening card reads “inspired by true events,” and the film has an intriguing genesis: whilst researching an entirely separate project on Australia’s history, Melbourne-based scribe Andrew Anastasios found a letter from one Cyril Hughes, a high-ranking officer charged with recovering and interring the Diggers from the abandoned battlefield via the Imperial War Graves Unit. One line caught Anastasios’ eye, and imagination: “one old chap managed to get here from Australia, looking for his son’s grave.”

His three-month off-screen journey to Constantinople begins roughly, as he is rebuffed by hard-line British officer Brindley (Dan Wyllie) in his request to visit the battlefield. Then, grinning urchin Orhan (Dylan Georgiades) boosts his bag and leads Connor on a merry chase through the market stalls before guiding him to the hotel run by his mother, Ayshe (Olga Kurylenko) and conservative uncle Omer (Steve Bastoni).

At first awkward and apprehensive, he develops tentative bonds with mother and boy, the latter of which promises him a fisherman to ferry him to the Gallipoli beachhead.

Cut to Crowe wading ashore there, to the astonishment of Hughes (Jai Courtney), who is coordinating the recovery effort, fraught with no little tension, with Turkish war vets Major Hasan and Sgt. Jemal (Yilmaz Erdogan and Cem Yilmaz, whose wildly successful 2001 Turkish dramedy Viziontele toured the fest circuit). “Are they all this stubborn?” one asks, to which Hughes replies “he’s the only father who came looking.”

In time, Connor uses his divining skills to locate the buried remains of Henry and Edward. With the help of Hasan and Jemal, he must negotiate a mysterious culture to track down the fate of Arthur.

The second star-powered, Oz-shot drama to preem down under in as many weeks following Angelina Jolie’s recent unveiling of Unbroken, The Water Diviner can’t help but feel diminished in comparison. The script, by Andrew Knight and Anastasios, relies heavily on coincidence and convenience to move Connor from Australia to Turkey and establish local allies, giving the narrative a perfunctory feel.

The use of “The Arabian Nights” as a leitmotif never gains traction, nor does the conceit that Connor can use the water divining powers to locate his boys. The decision to sprinkle shock cuts to pitched wartime battles, complete with a denture-rattling sound mix, disrupts the film’s flow and focus, suggesting a first-time director anxious to underscore established points about grief and the horror of the unknown.

Erdogan, Yilmaz and Courtney are fine in support of Crowe’s dependable, and some would say predictable persona, whilst Kurylenko does what she can with a role that seemingly exists to provide a measure of hope to Connor moving forward. Corr, O’Toole and Fraser share a battlefield scene vivid in its evocation of war’s ghastly sounds.

Crowe has wisely surrounded himself with top-tier tech talent, from the expectedly burnished lensing of Lord of the Rings/Hobbit D.P. Andrew Lesnie (filming in Australia and, briefly, Turkey) to costume designer Tess Schofield, here fresh off the success of The Sapphires.

The film’s final credit will be cryptic to those not familiar with Australia’s National Rugby League: after eight years of ownership, sport tragic Crowe and his partners have navigated their team to the most recent championship, which explains “South Sydney Rabbitohs 21st premiership you beauties.”