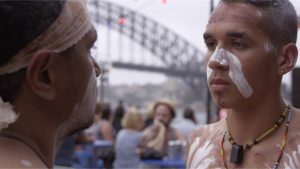 A perceptive, benevolent documentary about a contemporary and particularly high-stakes rite of passage from young adolescence to manhood, “Zach’s Ceremony” follows bright young Indigenous teenager Zacharias Doomadgee from the age of nine to 16 as he fends off prejudice in his Sydney community and prepares for his initiation ceremony in the far-north Queensland Aboriginal lands where his doggedly supportive yet unrelentingly tough father Alec grew up. “Not black, not white, sort of in the middle,” is how Zach describes himself, “I don’t know myself.” And it is this very poignancy of this struggle, patiently and gracefully assembled by director Aaron Petersen and producer-writer Sarah Linton, that earned the film the non-fiction Foxtel Movies Audience Awards at the recently-concluded Sydney Film Festival and will propel it to maturity on the festival circuit and in specialty situations.

Zach seems a genuinely engaging child who likes to hunt, fish and play sport with his father and four siblings. Alec is teaching the boy to box, and he seems adept at that too. Yet for all the camaraderie within his family there are troubling fissures in the foundation. One of the very few Indigenous children in his inner west Sydney high school, Zach is bullied, teased and ostracized as black, even though he is light-skinned (frustratingly, the reverse is true when he’s in Queensland). The film never makes Alec’s job situation clear, nor does it explain why Zach’s Aboriginal mother, who is seen later in the film, is out of his life (all Zach has to say on the subject to the camera is “if I think of all the good moments I’ve had, Mom isn’t there.). Alec has remarried, to the white Amy; she’s committed to the family and Zach likes her, but she’s determined to be more of a support figure than a surrogate mother.

When Zach is 14, Alec, who has his own issues with the prejudices of his father, makes a three-month, off-screen pilgrimage to go Walkabout with Native Americans. Whilst he’s gone, Zach begins smoking dope and drinking with his friends and causes Amy no end of consternation. Upon his father’s return, Zach is dispatched to his ancestral home to participate in the initiation—which goes much better than the chaotic 16th birthday party that follows.

Such ceremonies are rarely revealed to outsiders, and the last third of the film offers a unique opportunity to witness sequences of the initiation featuring Zach and other so-called Daru boys.

Petersen and Linton balance economy and insight in assembling what must have amounted to a sprawling amount of footage. Central to the former are the graceful animations sequences of Brendan Cook, which summarize the grim historical facts of the marginalized Indigenous people. The latter is emphasized by Alec’s mischievous home movie footage, which offers a sly reward to those who sit through the closing credits. “The knowledge continues…,” reads one of the final title cards, and it this kind of illumination of the ongoing Aboriginal struggle that will promote understanding, dialogue and positive change.