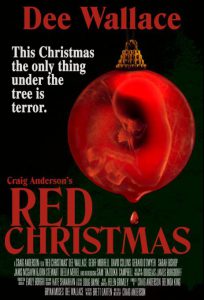 Ozploitation weighs in on the abortion debate with “Red Christmas,” in which an unsuccessfully terminated and hideously deformed fetus returns two decades later to wreak havoc during his family’s already volatile Yuletide celebration. Starring and co-produced by horror icon Dee Wallace (the original “The Hills Have Eyes,” “The Howling” and “Cujo,” not to mention the more family-friendly “E.T.”), the film is an energetic, candy-colored romp through genre tropes that manages to take its subject matter seriously whilst taking the piss out of itself at the same time. Following a lusty debut at the recently-concluded Sydney Film Festival, the title will be a natural fit for genre gatherings and ancillary.

In her sprawling rural estate (the film was shot on location in the verdant Southern Highlands of New South Wales), widowed yet spirited matriarch Diane (Wallace) has managed the not insignificant task of gathering her disparate offspring and their partners to a Christmas Day feast.

Their fete is interrupted by the arrival of the mysterious Cletus (Sam “Bazooka” Campbell), clad in dirty bandages and a black cloak, who has come with a letter to “Mother.” More out of politeness than anything else, Diane invites him in, only to realize his missive refers to the other Down Syndrome baby she aborted when her husband was dying of a brain tumor. Subsequently, she vehemently denies this to her family, saying “Y’know, this is exactly why I don’t go to church anymore.”

Cletus is unceremoniously thrown out of the house, but as night falls he has big plans for the mother who rejected him and the family he never knew.

Whilst the gore is relatively restrained for this sort of thing, first-time writer-director Craig Anderson (of the Aussie TV satire “Double the Fist”) compensates with an imaginative flair for the dispatches that includes a “Straw Dogs”-inspired death by animal trap, impalement by umbrella and the malicious use of a blender. Giving the film a distinctive visual sheen is the lighting design of Doug Bayne, which channels Joe Dante’s “It’s a Good Life” segment of “Twilight Zone: The Movie” with its neon glows produced by, in this case, the Christmas lights that festoon the inside of the house.

Wallace, who has built an off-screen career as a public speaker and self-help author, displays those qualities to good effect through the tough love and spunk of Diane (whose American accent is never explained). Collins, who is half of the popular comedy/mime duo The Umbilical Brothers (“The Upside Down Show,” seen on Nick Jr. stateside) is fine as the minister with backbone.

As with the best exploitation titles, it’s difficult to know when to take Anderson seriously: the distasteful, to some, subject matter is balanced by closing credits helpfully suggest a clutch of websites on the abortion issue as well as list for further watching that includes Alexander Payne’s “Citizen Ruth” and Tony Kaye’s “Lake of Fire.”