Posted on March 20, 2017 by eddie_cockrell
Uncategorized 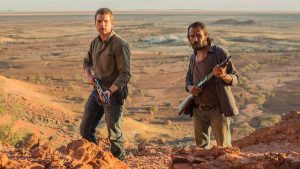 The sun is hot, the motives are cold and the film is blazingly noir as Indigenous detective Jay Swan (Aaron Pedersen) returns for another investigation of Outback moral rot in multi-hyphenate helmer Ivan Sen’s socially conscious, supremely accomplished procedural thriller Goldstone. A stand-alone sequel to his 2012 breakthrough Mystery Road, the film world-preemed as the sold-out opening night event of the Sydney Film Festival and has sparkling prospects for a long fest life and glowing sales.

Sen’s unique accomplishment with these two films, unequalled in contemporary Aussie cinema, is his daringly idealistic intention and crystal clear success at balancing the demands of contempo genre filmmaking with, in this case, the ongoing hot-button issues of Aboriginal relations (Sen is himself of mixed Indigenous/European heritage), human trafficking, the human greed behind corporate corruption and cultural destruction.

When first seen here, Jay Swan is a mess. Gone is the trim, alert, well-groomed lawman of the first film, with his flashy firearm and ominously clonking cowboy boots. In his place is a puffy, straggly-haired, unfocused and thong-shod drunk driver who is promptly pulled over and cited by local cop Josh Waters (Alex Russell, Unbroken) as he approaches the frontier mining outpost of the title (a fleeting reference to his dead daughter, who was very much alive in Mystery Road, suggests a probable cause of his dissolution).

It isn’t long before everyone in what passes for a town knows he’s arrived and is looking for a Chinese woman who has gone missing. A visit to the local Aboriginal community leads Jay to the fenced-off border of the Furnace Creek gold mine, where he finds evidence of Asian women being flown in and out of the compound.

After Swan’s trailer at the forlorn Diggers Rest motel is shot up by a mysterious group of bikers, Josh moves Swann to a remote cabin. The visitor believes the local is on the take, and they argue.

As Swan moves up the local chain of command, such as it is, he’s met with a wall of indifference, derision and outright hostility. The boss of the Furnace Creek Metals group mining company (David Wenham, The Boys and Top of the Lake) offers him a morning beer but little information, whilst Goldstone’s mayor, the relentlessly cheerful yet ominously brittle Maureen (Jacki Weaver, Animal Kingdom and Silver Linings Playbook) bakes him an apple pie but warns him in no uncertain terms to lay off the meddling.

The head of the local Aboriginal land council, Tommy (Tom E. Lewis, The Chant of Jimmy Blacksmith and We of the Never Never), is clearly corrupt and is thus of no help at all. Only local elder Jimmy (Indigenous icon David Gulpilil, seen most recently in Charlie’s Country) is sympathetic to Swan’s cause, taking him on a magical canoe trip to a deep gorge where ancient rock art begins a kind of spiritual awakening for the detective.

Meanwhile, outraged at Jay’s accusations of corruption, Josh begins an investigation of his own, visiting the local brothel where the madam, Mrs. Lao (martial arts queen Cheng Pei-Pei, Crouching Tiger, Hidden Dragon), reluctantly displays the working women there. These include May (Michelle Lim Davidson), who is chafing to leave but must learn to trust Josh—and he her.

When a local hermit gives Jay the missing girl’s passport, it triggers a chain of events that leads to Swan and Josh storming Furnace Creek in a breath-taking shoot-out that rights many of the wrongs whilst handily eclipsing the climactic gun battle in Mystery Road.

There are Western tropes aplenty on display, but Swan’s determination and demeanour here is also reminiscent of Raymond Chandler’s manifesto description of his iconic gumshoe creation Philip Marlowe: “Down these mean streets a man must go who is not himself mean, who is neither tarnished nor afraid. He is the hero; he is everything…”.

Sen wrote the role specifically for Pedersen, who in turn modelled much of the character’s mannerisms on his director. The supporting performances are uniformly strong, with all thesps locked tightly into their genre functions; Weaver’s slightly deranged take on Mayor Maureen provides both spice and a dollop of macabre humour.

Sen writes, directs, edits, photographs and scores his films, imbuing the tech package with a vision at once accessible and tangibly personal. Adding to the symbiotic nature of the package is the return of the principal production crew from the first film. Goldstone is nothing if not a focused, unified piece.

Pic was shot under challenging conditions in the the outback western Queensland settlement of Middleton, population three. Goldstone also reps a bit of film history, being the first stand-alone sequel in memory to open the same well-established festival (Sydney is in its 63rd year) as its predecessor.